Enjoy an educational and amusing tour of Bratislava’s second castle – the magnificent Devin Castle located in the west of the city, a short drive from the city center. We will make its fascinating history come alive and you will amazed by its beautiful natural setting savoring the breathtaking bird’s eye views from the top. 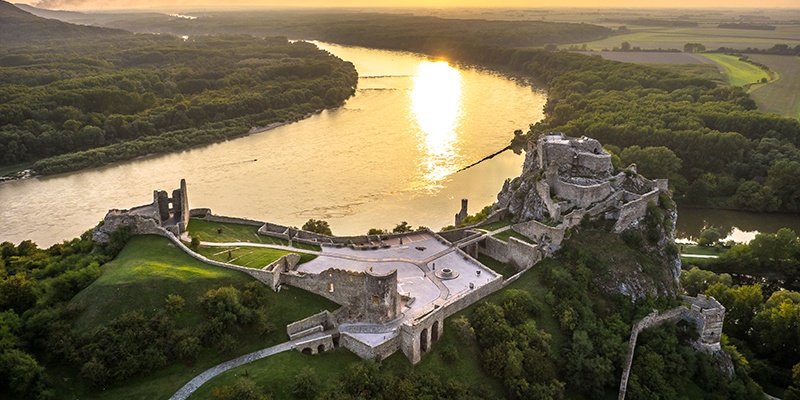 In order to receive a complex overview of the city we recommend to combine the Devin Castle Tour with the Bratislava Castle & Old Town Tour.

In Bratislava’s western suburb, Devin Castle is set in a beautiful natural scenery. Build on top of a 80m high rocky outcrop, it towers over the historic village of Devin. It also prominently guards the confluence of the Danube and the Morava rivers, which form the border with Austria. After WWII the infamous Iron Curtain ran right below the castle rock fiercely guarding the access to the river as the “West” was just a stone throw away.
The rock saw presence of the Celts as well as the Romans, who built a Christian chapel here as early as the 4th century. Its remains are visible even today. Later the Slavs who had an important stronghold here built a church on top of the hill whose foundations have been preserved. The beginnings of the medieval Castle date to the 12-13th century. Because of its strategic location at the border for almost two millennia, it had been occupied and fought for by many armies and sovereigns.
Always rebuilt, the Castle was last destroyed by Napoleonic troops in 1809 when the castle had no longer a strategic importance. Since the 1930s the vast castle grounds have seen extensive archaeological research lasting decades. Since the 1970s great efforts have been made to preserve and partly rebuild what has been left.
The most attractive part of Devin Castle is the Upper Castle high on the rock. Today only the ground floor remains of what used to be a 25 m tall donjon. But the cellars in the rock beneath used since the ancient times have been preserved. The panoramic views of the countryside around reaching all the way to Vienna and the Alps are just breathtaking.
Request a quote

“Dear Martin, how can we tell you how much this day meant to us? Wow! What a meeting of the minds! It has been a highlight of the 12 trips that we have made together. We feel like we took a first rate course at Slovak University given by a distinguished professor. It was a great pleasure from start to finish.” 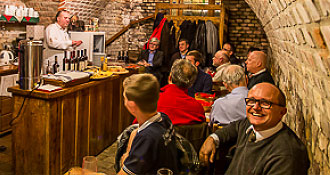 Enjoy an expert tour of t the magnificent Devin Castle and admire unspoiled countryside along the Danube.